The Residence of Würzburg was constructed from 1720-1744 by the architect Balthasar Neumann. It served as the seat of Würzburg's prince bishops until the end of the secularization. This huge palace is one of the most important examples for Baroque architecture, it belongs to the UNESCO Cultural Heritage, therefore people from all over the world come for visiting it. In 1814, Würzburg became part of the Kingdom of Bavaria and so the residence was used as a palace for the Kings. At the very end of the Second World War, on March 16th, 1945, the buildings were gravely damaged by the air raid, but fortunately, the magnificant staircase with its self-supporting vault and the ceiling painting by the Italian artist Giovanni Batista Tiepolo were not destroyed. Valuable furniture and paintings that can be seen today are also in the original state because they had been hidden in a safe place before. But a lot of the rooms and halls were destroyed and the restauration of all the buildings was a difficult; it was finished in 1987. The costs for the restauration amounted finally to 20 million dollars. 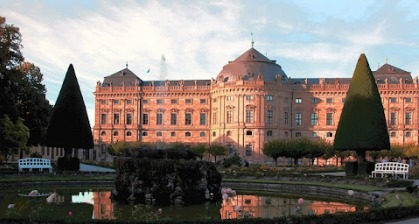