The old Main bridge is one of the most popular landmarks in Würzburg. It connects the old town of Würzburg with the quarter of the river Main and the hill on which Fortress Marienberg is located. The bridge was built in the years 1473-1543 and it should replace the destroyed Romanesque bridge from 1133. From 1730 on, well-known statues of saints or important people in the history of Würzburg such as the statue of Saint Nepomuk or the one of Saint Fredericus were added to the very impressive construction so that the viewers today are reminded of the Renaissance. You can also see the statue of Charlemagne who was crowned to the Emperor of the Holy Roman Empire of German Nation in the year 800. The statues of the three Irish saints Kilian, Kolonat and Totnan are important for Würzburg's history: Kilian was an Irish missionary bishop who brought Christianity to Franconia with his companions Kolonat and Totnan. The three are also called apostles of Franconia.They began their mission around 680, but in 689 they all had to suffer the martyr's death. Today, Kilian still plays an important role for the city, he is the patron saint of Würzburg and always in July there is a famous fair, called "Kiliani". On April 2, 1945 the bridge was destroyed and had to be rebuilt after the Second World War. In the year 1992 it was closed for traffic.

This bridge also has a cultural meaning for many people in Würzburg: A lot of people meet on the bridge just to talk and enjoy the sunshine, sometimes music festivals also take place here. You can get delicious food and drinks in the restaurant "Alte Mainmühle" and there´s also a bridge festival every year. On the old Main brigde you can not only feel the historic atmosphere, but also the nature in harmony with the city and you have got a fantastic view over some of Würzburg's most beautiful sights. In the front there is the Fortress Marienburg. From up there you have a fantastic view over the whole city of Würzburg. Especially at night, it's a very impressive picture with all the lights shining bright. In the castle itself you will find the original figures of Adam and Eve made by Tilman Riemenschneider, in Mainfränkisches Museum. The figures at the Marienkapelle are just copies. At the fortress there is a good restaurant and conference rooms which you can book to have meetings. Facing Fortress Marienberg you can see the Steinburg on the right side. It is one of the most beautiful castle hotels in Europe. It's build in the baroque style and even Goethe was a guest in this castle. If you look down, you can see the old power crane, it's called "Alter Kranen" which was used to load and unload ships. Today there is one of the best Italian restaurants and in summer there's a beer garden next to it, called the "alter Kranen", too. During World War II it wasn't attacked and all of its mechanic would still work, but the last time it was used was at the beginning of the 20th century for unloading wood. Today it is a very popular meeting-point especially for young people.Then there's the Käppele of Würzburg to the left side of Fortress Marienberg. It is a little pilgrimage church. It was built by the plans of Balthasar Neumann. It is one of the churches in Würzburg which were not destroyed during the bomb attack on Würzburg. The Käppele is famous because of its "Stationsweg" and for its rich architecture and glamorous interior decoration. It is also a very popular wedding church because you can take very romantic photos with a beautiful view over Würzburg there. 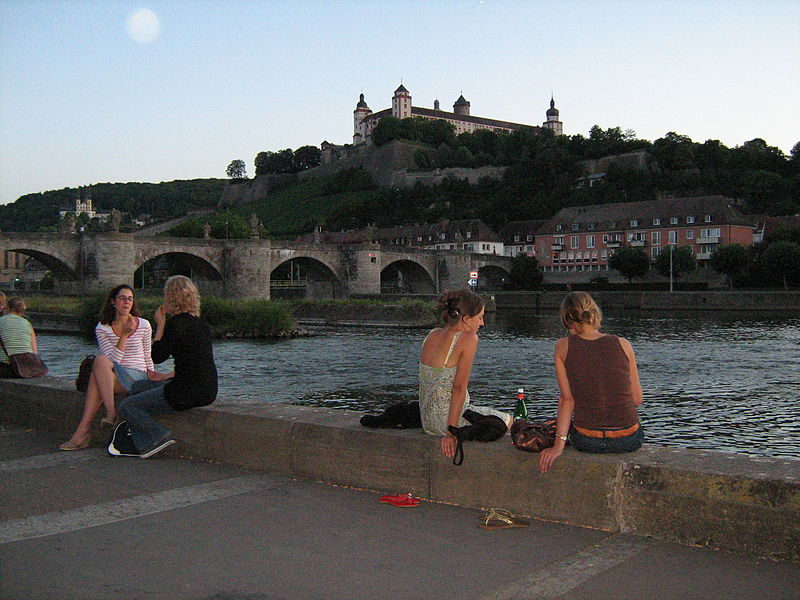