St Mary's chapel at Würzburg Market Square is really worth seeing. Very remarkable about this church is the elaborate ornamentation, especially in the arches of the doorways. At the southern entrance you can see the very famous figures of Adam and Eve made by Tilman Riemenschneider in the year 1493. Tilman Riemenschneider was a German sculptor and woodcarver, who lived for a long time in Würzburg. And he created a lot of religious sculptures and altars. In the late Gothic period in the year 1377 citizens of Würzburg began with the construction of the chapel on their own responsibility. The curch was finished in 1480 with the erection of the church tower. The chapel is directly related to the destruction of the Jewish community of Würzburg. Below the sacristy there is still the mikvah, the Jewish ritual bath, as a remnant of the former synagogue. If you step a bit further down, you can have a look at the top of the roof. In the year 1711 the tower was destroyed by a lightning strike. But two years later the church got a Baroque dome and on top a Madonna of gilded copper. At the end of the 2nd World War in 1945 after a bomb attack, the roof, windows and interior were destroyed and the walls were damaged in their foundations. The tower with its Madonna was one of the little undestroyed things in the totally destroyed city. 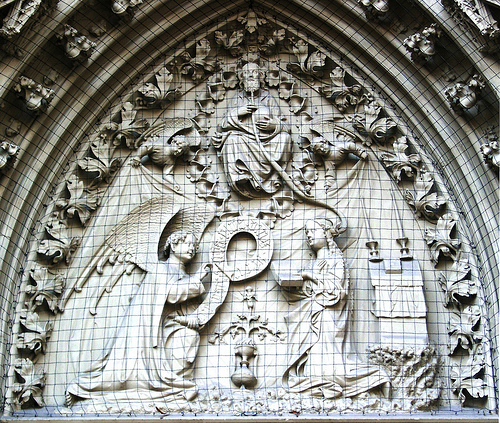 At the backdoor of St. Mary's Chapel you can see very interesting details of Christian belief. This Chapel was built at the end of the 14th century and at that time the majority of the people could not read. So everything they needed to know about the bible, they heard from the priest or from pictures. As you can see, this relief tells the story of the immaculate conception. At the top of the relief you can see God sitting on a chair and there is a slide coming out of his mouth and it finally leads into Mary's ear. On the slide there is the little Baby Jesus sliding down from God's mouth into Mary's ear. And this is exactly the image the people in the medieval times had of the immaculate conception. On the rooftop you can see gargoyles of different centuries. Gargoyles are meant to expel the evil and fear of the people and the latest gargoyle was put up the roof after the 2nd World War. It is a soldier with a gun and a helmet on his skull. So he represents the fear of war.